THE PALACE AND THE COLLEGIATE CHURCH

The Palace is a building of rectangular shape, of the North and South sides respectively are two parallel wings that leave each other two courtyards, the cars and the Horseshoe.

In the Center is preserved the old cloister of the House hospedería of them friars, called patio of the source.

The facade measuring 155 metres in length; the height to the general entablature is 13.5 meters and that of the centre including the attic of 22.3 meters. It consists of a part central and two lateral.

The Centre of the facade is composed of columns and composite pilasters supporting an entablature that runs a balustrade adorned with marble vases.

Rises in the Middle four columns which support a rectangular attic, also crowned with a balustrade. Those three intercolumniations are occupied by doors of iron in the plant low and by balconies flown in the main. On the five remaining of each side opens a door and a balcony or window and balcony.

The balustrade of the crest serves of support to vases of marble white adorned with garlands. The penthouse rectangular is composed of four caryatids of marble, that represent the stations of the year and that argue with heads and arms an entablature equal to the general, crowned also by a balustrade that carries over trophies warriors.

In the intercolumniation central are sculpted in marble them weapons of Spain and House of Bourbon, gathered by the fleece of gold and considered by the Crown Royal. In the other two of them sides is represent, in medallions circular them portraits of them Kings founders dresses of warriors Roman.

Between the brackets that hold the balconies are symbolized in three covers of marble, the dawn, day and night.

The idea of the facade is due to the abbe Juvara, Italian architect, having replaced his disciple Saqueti. This outlined it and definitely traced.

Its construction was back to the building. The cost amounted to 3.360.000 reais.

The palace housed a rich collection of paintings and sculptures, that are now in the museo del Prado in Madrid. Now you can admire interesting paintings from the 7th to the 19th, rich furniture, clocks, porcelain, glass lamps, a rich collection of statues and a Museum of tapestries. Frescoes painted on the vaults of artists Rusca, Bonavia and Fedeli.

Consecrated to the Holy Trinity, it is attached to the rear façade of the Palace. The temple is figure of Latin cross, the altar, the choir and the two main gates occupy limbs.

The cruise is covered by a high Dome, whose vault is painted in fresco by Salvador Maella.

In the temple lie the remains of the founding Kings, Felipe V and Isabel de Farnesiso, in a rich Pantheon with pedestal and sculptures of maeble, the work of the sculptor Demandré. 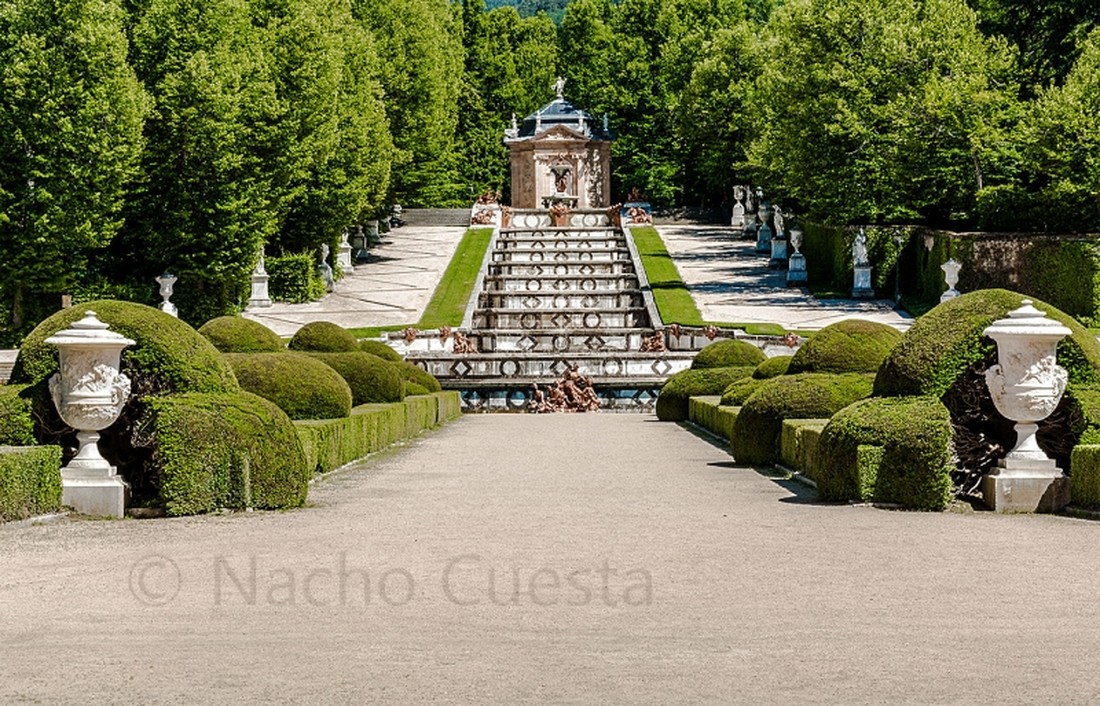