THE PALACE AND THE COLLEGIATE CHURCH

The Palace is a building of rectangular shape, of the North and South sides respectively are two parallel wings that leave each other two courtyards, the cars and the Horseshoe.

In the Center is preserved the old cloister of the House hospedería of them friars, called patio of the source.

The facade measuring 155 metres in length; the height to the general entablature is 13.5 meters and that of the centre including the attic of 22.3 meters. It consists of a part central and two lateral.

The Centre of the facade is composed of columns and composite pilasters supporting an entablature that runs a balustrade adorned with marble vases.

Rises in the Middle four columns which support a rectangular attic, also crowned with a balustrade. Those three intercolumniations are occupied by doors of iron in the plant low and by balconies flown in the main. On the five remaining of each side opens a door and a balcony or window and balcony.

The balustrade of the crest serves of support to vases of marble white adorned with garlands. The penthouse rectangular is composed of four caryatids of marble, that represent the stations of the year and that argue with heads and arms an entablature equal to the general, crowned also by a balustrade that carries over trophies warriors.

In the intercolumniation central are sculpted in marble them weapons of Spain and House of Bourbon, gathered by the fleece of gold and considered by the Crown Royal. In the other two of them sides is represent, in medallions circular them portraits of them Kings founders dresses of warriors Roman.

Between the brackets that hold the balconies are symbolized in three covers of marble, the dawn, day and night.

The idea of the facade is due to the abbe Juvara, Italian architect, having replaced his disciple Saqueti. This outlined it and definitely traced.

Its construction was back to the building. The cost amounted to 3.360.000 reais.

The palace housed a rich collection of paintings and sculptures, that are now in the museo del Prado in Madrid. Now you can admire interesting paintings from the 7th to the 19th, rich furniture, clocks, porcelain, glass lamps, a rich collection of statues and a Museum of tapestries. Frescoes painted on the vaults of artists Rusca, Bonavia and Fedeli.

Consecrated to the Holy Trinity, it is attached to the rear façade of the Palace. The temple is figure of Latin cross, the altar, the choir and the two main gates occupy limbs.

The cruise is covered by a high Dome, whose vault is painted in fresco by Salvador Maella.

In the temple lie the remains of the founding Kings, Felipe V and Isabel de Farnesiso, in a rich Pantheon with pedestal and sculptures of maeble, the work of the sculptor Demandré.

BRIEF HISTORY OF THE ROYAL SITE

The Royal place is located on the northern slopes of the sierra de Guadarrama; its wonderful forests and undergrowth always enjoyed hunting wealth extraordinary, very appreciated, since long ago, by the different Kings of Castile, who reserved the privilege to hunt in them.

In 1.450 the King Enrique IV of Castile sent build a hostel and a chapel that was dedicated to Saint Ildefonso.

In the year 1,477 the Catholic Kings donate the Chapel and the hostel, as well as the adjacent lands, to the monks Jerónimos Monastery of el Parral, which is located in the outside the walls of Segovia.

Then the monks will build in the place a hospice, that with their orchards and farm,  they give origin to the village, and which therefore must be the name of "La Granja", which is so well known.

In 1700, the French Duke of Anjou, grandson of King Luis XIV of France, becomes at age 17 in the new King of Spain and the Indies, reigning with the name of Felipe V, inaugurating the dynasty of the Bourbons in Spain, that lasts until today.

Felipe V that frequented these mountains and that would end up fascinated of the beauty of them, He wanted to build a Palace with its gardens, that it seems and you remembered to the Palace of Versailles, where the he was born and had lived.

It project and them flat of the future Palace, are responsible to don Teodoro Ardemans, master more of the Real Palace and Villa of Madrid, having imposed the King his desire to keep the former guesthouse of the friars.

1.763. the King Carlos III, signs in the Palace the decree with which it creates the first lottery official of Spain.  The first draw, which was held on December 10 of that year in the plaza of San Ildefonso in Madrid.

1.783 Carlos III ordered to build a new graveyard wings outside the town in a distant place one kilometer from the population. Making it in the first cementrio outside of Spain and possibly Europe. Also was built the hospital of San Fernando, is also the first hospital outside the walls.

Signature of the Treaty of San Ildefonso.

-1,742. Signed between Spain and Denmark, Treaty of friendship and cooperation in navigation and trade.

-1777, 1,796 and 1,800. They are basically military alliances between Spain and France, focused on jointly fighting against England.

-1836. the "sargentada", revolt of the garrison of the Palace which forced the Regent María Cristina de Borbón to restore the Constitution of 1812.

-1.913. June 20, the birth of Don Juan de Borbón in the Palace, father of Don Juan Carlos I, and therefore grandfather of the current King Felipe VI.

-1937 during the Spanish civil war, in the vicinity of La Granja is developing a Republican offensive, which came close to taking the town, being frustrated by the troops of the national army. 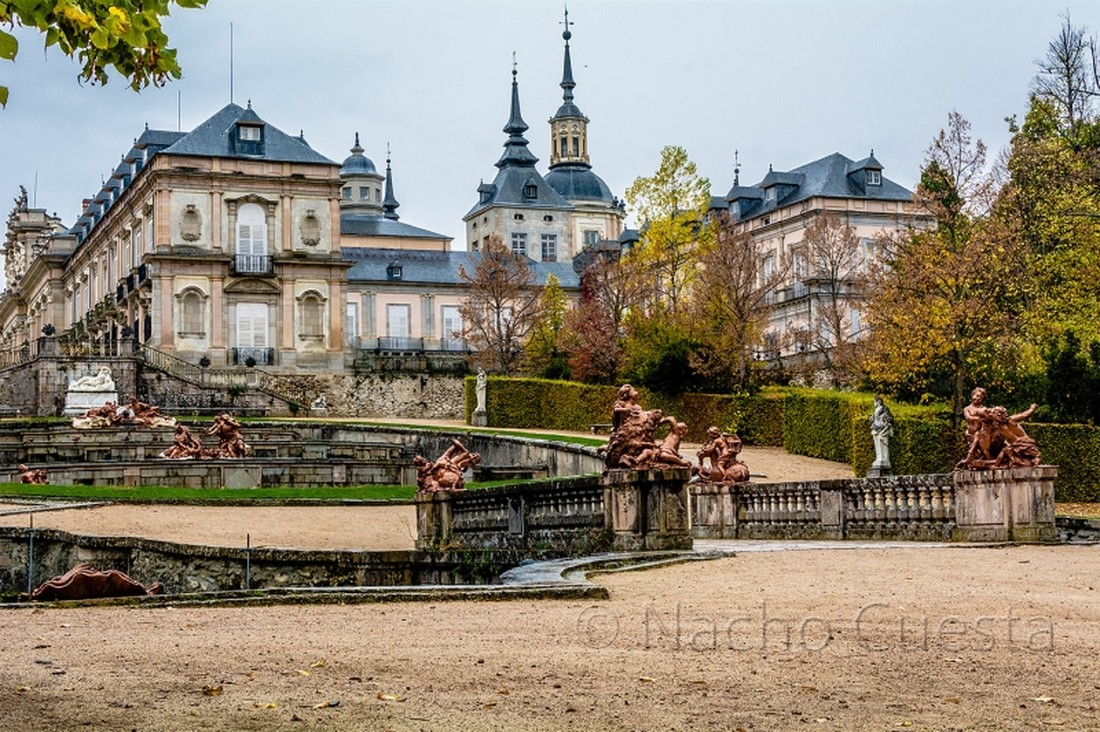 We begin these post about the gardens of "La Granja",  with a brief description about the municipality in question.

The Real Site of San Ildefonso (also known as La Granja or La Granja de San Ildefonso), is a municipality in the province of Segovia (Castilla y León-Spain), located at the foot of the sierra de Guadarrama, to 11kms. Segovia and 77kms. of Madrid.

Its historic town centre is declared as Monumental historical set. Besides its mountains and pine forests are part of the Natura 2000 network and declared by the UNESCO biosphere reservation.

Compose the municipality populations of La Granja, La Pradera de Navalhorno, Valsaín and Riofrio. Adding together all a population (the year 2010) of 5,700.

The town of La Granja, is born and grows attached to the Royal Palace which was built for King Felipe V.

Apart from Palace and gardens (which we will deal in other entries),  in the village of La Granja include other monuments as the Royal glass factory, created in 1727 in an impressive industrial building that is still in good condition and which today houses the technological Museum of glass, a research and documentation centre and a school workshop, all dedicated to the glass.

Also inside of what the town has built buildings of the 18th century to give service to the Palace itself and its workers, as the old royal stables, House of canons, the trades House, House of infants, which today is the National Parador, or Corps of guards, that currently the Palacio de Congresos is located. Others such as the Palace of Bauer, or churches of Sorrows, the Christ of forgiveness and San Juan Nepomuceno, the Royal Polo field and the two gateways to the population. 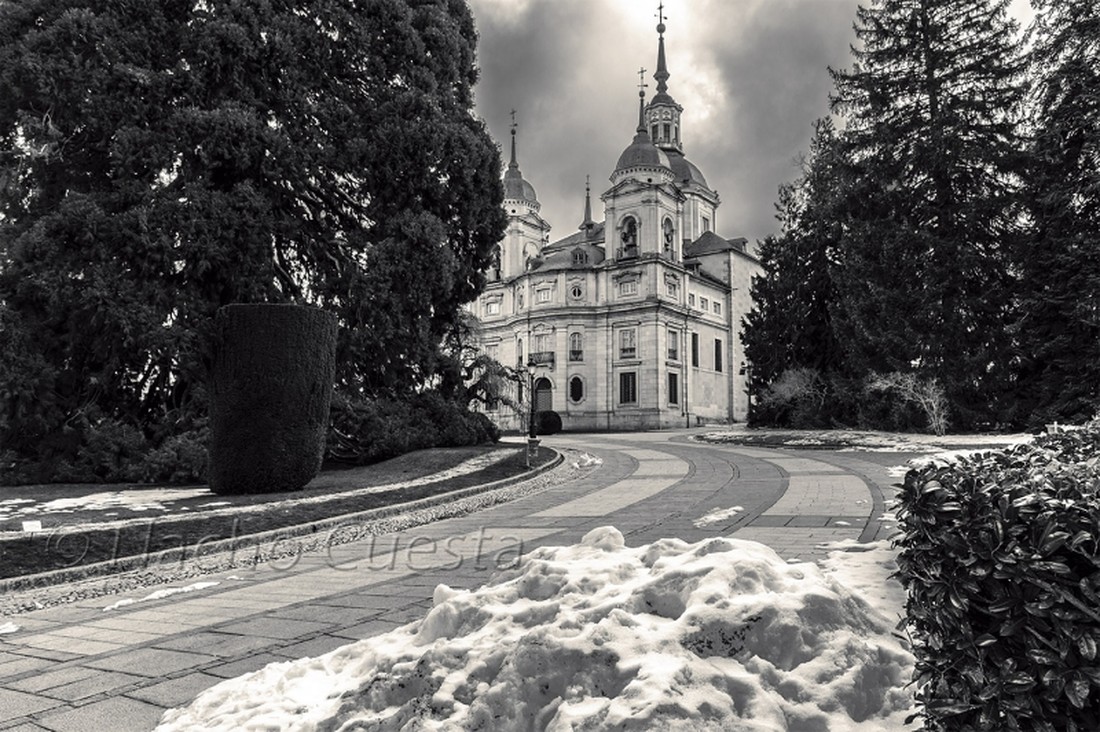